Let's take a look at Schizophrenia 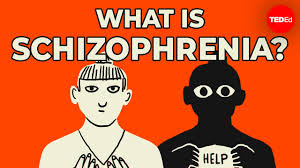 Schizophrenia is characterized by distortions in thinking, perception, emotions, language, sense of self and behaviour.  Common experiences include hallucinations (hearing voices or seeing things that are not there) and delusions (fixed, false beliefs).

Worldwide, schizophrenia is associated with considerable disability and may affect educational and occupational performance.

People with schizophrenia are 2-3 times more likely to die early than the general population.  This is often due to preventable physical diseases, such as cardiovascular disease, metabolic disease, and infections.

Stigma, discrimination, and violation of human rights of people with schizophrenia is common.

Schizophrenia is treatable.  Treatment with medicines and psychosocial support is effective.

Schizophrenia is a psychosis, a type of mental illness characterized by distortions in thinking, perception, emotions, language, sense of self and behaviour.

·      hallucination: hearing, seeing, or feeling things that are not there.

·      delusion: fixed false beliefs or suspicions not shared by others in the person’s culture and that are firmly held even when there is evidence to the contrary.

·      abnormal behaviour: disorganised behaviour such as wandering aimlessly, mumbling, or laughing to self, strange appearance, self-neglect or appearing unkempt.

·      disturbances of emotions: marked apathy or disconnect between reported emotion and what is observed such as facial expression or body language.

Schizophrenia is treatable. Treatment with medicines and psychosocial support is effective. However, most people with chronic schizophrenia lack access to treatment.

There is clear evidence that old-style mental hospitals are not effective in providing the treatment that people with mental disorders need and violate basic human rights of persons with mental disorders.  Efforts to transfer care from mental health institutions to the community need to be expanded and accelerated.  The engagement of family members and the wider community in providing support is especially important.

Programmes in several low- and middle- income countries (e.g., Ethiopia, Guinea-Bissau, India, Iran, Pakistan, and United Republic of Tanzania) have demonstrated the feasibility of providing care to people with severe mental illness through the primary health-care system by:

·      educating the public to decrease stigma and discrimination.

·      enhancing independent living skills through recovery-oriented psychosocial interventions (e.g., life skills training, social skills training) for people with schizophrenia and for their families and/or caregivers; and

People with schizophrenia are prone to human rights violations both inside mental health institutions and in communities.  Stigma of the disorder is high.  This contributes to discrimination, which can in turn limit access to general health care, education, housing, and employment.