Falls can be devastating for individuals. Can we try and help prevent them?

Falls are the second leading cause of accidental or unintentional injury deaths worldwide.

Each year an estimated 646 000 individuals die from falls globally of which over 80% are in low- and middle-income countries.

Adults older than 65 years of age suffer the greatest number of fatal falls.

37.3 million falls that are severe enough to require medical attention occur each year.

A fall is defined as an event which results in a person coming to rest inadvertently on the ground or floor or other lower level.  Fall-related injuries may be fatal or non-fatal, though most are non-fatal.  For example, of children in the People's Republic of China, for every death due to a fall, there are 4 cases of permanent disability, 13 cases requiring hospitalization for more than 10 days, 24 cases requiring hospitalization for 1–9 days, and 690 cases seeking medical care or missing work/school.

Globally, falls are a major public health problem.  An estimated 646 000 fatal falls occur each year, making it the second leading cause of unintentional injury death, after road traffic injuries.  Over 80% of fall-related fatalities occur in low- and middle-income countries, with regions of the Western Pacific and South East Asia accounting for 60% of these deaths.  In all regions of the world, death rates are highest among adults over the age of 60 years.

While nearly 40% of the total DALYs lost due to falls worldwide occurs in children, this measurement may not accurately reflect the impact of fall-related disabilities for older individuals who have fewer life years to lose.  In addition, those individuals who fall and suffer a disability, particularly older people, are at a major risk for subsequent long-term care and institutionalization.

While all people who fall are at risk of injury, the age, gender, and health of the individual can affect the type and severity of injury.

Age is one of the key risk factors for falls.  Older people have the highest risk of death or serious injury arising from a fall and the risk increases with age.  For example, in the United States of America, 20–30% of older people who fall suffer moderate to severe injuries such as bruises, hip fractures, or head trauma.  This risk level may be in part due to physical, sensory, and cognitive changes associated with ageing, in combination with environments that are not adapted for an aging population.

Another high-risk group is children.  Childhood falls occur largely as a result of their evolving developmental stages, innate curiosity in their surroundings, and increasing levels of independence that coincide with more challenging behaviours, commonly referred to as ‘risk taking’.  While inadequate adult supervision is a commonly cited risk factor, the circumstances are often complex, interacting with poverty, sole parenthood, and particularly hazardous environments.

Across all age groups and regions, both genders are at risk of falls.  In some countries, it has been noted that males are more likely to die from a fall, while females suffer more non-fatal falls.  Older women and younger children are especially prone to falls and increased injury severity.  Worldwide, males consistently sustain higher death rates and DALYs lost.  Possible explanations of the greater burden seen among males may include higher levels of risk-taking behaviours and hazards within occupations.

Other risk factors include:

·      occupations at elevated heights or other hazardous working conditions;

·      underlying medical conditions, such as neurological, cardiac or other disabling conditions;

·      side effects of medication, physical inactivity and loss of balance, particularly among older people;

·      poor mobility, cognition, and vision, particularly among those living in an institution, such as a nursing home or chronic care facility;

·      unsafe environments, particularly for those with poor balance and limited vision. 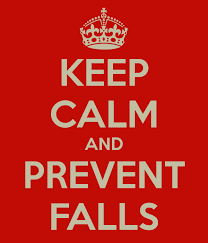 ·      screening within living environments for risks for falls;

·      home assessment and environmental modification for those with known risk factors or a history of falling;

·      use of hip protectors for those at risk of a hip fracture due to a fall.

For children, effective interventions include multifaceted community programmes; engineering modifications of nursery furniture, playground equipment, and other products; and legislation for the use of window guards.  Other promising prevention strategies include: use of guard rails/gates, home visitation programmes, mass public education campaigns, and training of individuals and communities in appropriate acute paediatric medical care should a fall occur.

Balance exercises are good to help in the prevention of falls, as is being active and doing general exercise.