Why are Green Vegetables so good for you. We look at their nutritional content here. 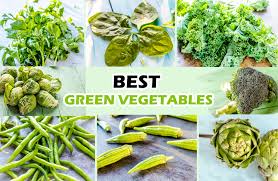 Chances are, you grew up in a household where your mother would (over)cook vegetables and you would refuse to eat them. I recall vividly plates of “greens” that smelt as bad as they looked. Nowadays, parents often have a different problem: Kids love vegetables as long as they're deep fried, smothered in some kind of dressing or covered with cheese. But here's the deal: All of us (yes, that means you!) need to eat some greens on a regular basis (without the unhealthy extras).

So be a grown-up and get over your green-avoiding excuses. Excuses like...

But, they don't taste good.  Unless you're severely allergic, there's no reason you shouldn't at least try a variety of greens before banishing them from your plate forever. Everyone's taste buds differ, and our flavour preferences can change over time, so a food you may have tried and hated when you were 11 might turn out to be your new favourite dish. So, give greens a second (or third, or tenth) chance.  I know I hated mushrooms as a child, and cabbage. I like both now.

But, they're expensive.  Let's differentiate between non-organic and organic veggies. Non-organic vegetables can be found at any supermarket and are relatively cheap. Organic vegetables aren't coated in synthetic pesticides and chemical fertilizers, but they are a bit costlier. You don't have to eat organic greens. Do they have less pesticide residue than non-organic? Yes. Are they absolutely necessary to great health? No.

But, I don't know how to cook.  Who said anything about cooking? Sure, vegetables (and most everything else) tend to taste better when there's some kind of fat involved, but they're also delicious when eaten raw in a salad or even blended up with some fruit or yogurt in a smoothie. If you feel like you must cook them, try sautéing them in a pan that's been coated with a little bit of non-stick spray. Voila!  Most vegetables are boiled in water anyway.

But, I don't know which ones have which health benefits.  You do know that they all have health benefits of some sort, right? Leafy greens, like romaine, kale, and spinach, are low in calories and are a fantastic source of fibre and vitamins A, C and K. Broccoli's rich in vitamins A and C as well, and Potassium.   But we will look at some vegetables here for you.

KALE:  is considered one of the most nutrient-dense vegetables on the planet due to its many vitamins, minerals, and antioxidants.  For example, one cup (67 grams) of raw kale packs 684% of the Daily Value (DV) for vitamin K, 206% of the DV for vitamin A and 134% of the DV for vitamin C.  It also contains antioxidants such as lutein and beta-carotene, which reduce the risk of diseases caused by oxidative stress.  To benefit most from all that kale has to offer, it’s best consumed raw since cooking can reduce its nutrient profile. 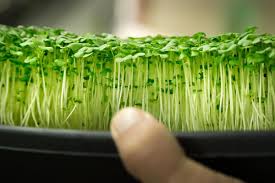 MICROGREENS:  are immature greens produced from the seeds of vegetables and herbs. They typically measure 1–3 inches.  Since the 1980s, they have often been used as a garnish or decoration, but they have many more uses.  Despite their small size, they’re full of colour, flavour, and nutrients. In fact, one study found that microgreens contain up to 40 times more nutrients compared to their mature counterparts. Some of these nutrients include vitamins C, E and K.  Microgreens can be grown in the comfort of your own home all year round, making them easily available.

COLLARED GREENS  are loose leaf greens, related to kale and spring greens. They have thick leaves that taste slightly bitter.  They’re similar in texture to kale and cabbage. In fact, their name comes from the word “colewort.”  Collard greens are a good source of calcium and the vitamins A, B9 (folate) and C. They’re also one of the best sources of Vitamin K when it comes to leafy greens. In fact, one cup (190 grams) of cooked collard greens packs 1,045% of the DV for vitamin K.  Vitamin K is known for its role in blood clotting. In addition, more research is being done regarding its ability to improve bone health.  One study in 72,327 women aged 38–63 found that those with vitamin K intakes below 109 mcg per day had a significantly increased risk of hip fractures, suggesting a link between this vitamin and bone health.

SPINACH  is a popular leafy green vegetable and is easily incorporated into a variety of dishes, including soups, sauces, smoothies, and salads.  Its nutrient profile is impressive with one cup (30 grams) of raw spinach providing 181% of the DV for vitamin K, 56% of the DV for vitamin A and 13% of the DV for manganese.  It’s also packed with Folate, which plays a key role in red blood cell production and the prevention of neural tube defects in pregnancy.  One study on the neural tube defect spina bifida found that one of the most preventable risk factors for this condition was a low intake of folate during the first trimester of pregnancy.  Along with taking a prenatal vitamin, eating spinach is a great way to increase your folate intake during pregnancy

CABBAGE  is formed of clusters of thick leaves that come in green, white and purple colours.  It belongs to the “Brassica” family, along with Brussels sprouts, kale, and broccoli.  Vegetables in this plant family contain glucosinolates, which give them a bitter flavour.  Animal studies have found that foods that contain these plant compounds may have cancer-protective properties, especially against lung and oesophageal cancer.  Another benefit of cabbage is that it can be fermented and turned into sauerkraut, which provides numerous health benefits, such as improving your digestion and supporting your immune system. It may even aid weight loss. 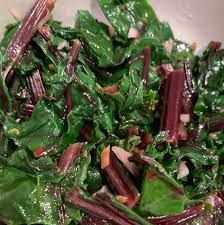 BEET GREENS  Since the Middle Ages, beets have been claimed to be beneficial for health.  Indeed, they have an impressive nutrient profile, but while beets are commonly used in dishes, the leaves are often ignored.  This is unfortunate, considering that they’re edible and rich in potassium, calcium, riboflavin, fibre and vitamins A and K.  Just one cup (144 grams) of cooked beet greens contains 220% of the DV for vitamin A, 37% of the DV for potassium and 17% of the DV for fibre.  They also contain the antioxidants beta-carotene and lutein, which may reduce the risk of eye disorders, such as macular degeneration and cataracts.  Beet greens can be added to salads, soups or sauteed and eaten as a side dish.

WATERCRESS  is an aquatic plant from the Brassica family and thus similar to arugula and mustard greens.  It’s said to have healing properties and has been used in herbal medicine for centuries. However, no human studies have confirmed these benefits so far.  Test-tube studies have found watercress extract to be beneficial in targeting cancer stem cells and impairing cancer cell reproduction and invasion.  Due to its bitter and slightly spicy flavour, watercress makes a great addition to neutrally flavoured foods.

ROMAINE LETTUCE  is a common leafy vegetable with sturdy, dark leaves with a firm centre rib.  It has a crunchy texture and is a popular lettuce, particularly in Caesar salads.  It’s a good source of vitamins A and K, with one cup (47 grams) providing 82% and 60% of the DVs for these vitamins respectively.  What’s more, research in rats showed that lettuce improved their levels of blood lipids, potentially reducing the risk of heart disease. Further studies need to investigate these benefits in people.

SWISS CHARD  has dark-green leaves with a thick stalk that is red, white, yellow, or green. It’s often used in Mediterranean cooking and belongs to the same family as beets and spinach.  It has an earthy taste and is rich in minerals and vitamins, such as potassium, manganese and the Vitamins A, C, and K.  Swiss chard also contains a unique flavonoid called syringic acid:  a compound that may be beneficial for lowering blood sugar levels.  In two small studies in rats with diabetes, oral administration of syringic acid for 30 days improved blood sugar levels.  However, it’s important to note that these were minor animal studies and that human research supporting the claim that syringic acid may aid blood sugar control is lacking.  While many people typically throw away the stems of the Swiss chard plant, they’re crunchy and highly nutritious.  Next time, try adding all parts of the Swiss chard plant to dishes such as soups, tacos, or casseroles. 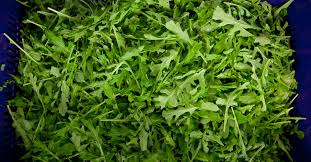 ARUGULA  is a leafy green from the Brassica family that goes by many different names, such as rocket, colewort, roquette, rucola and rucoli.  It has a slightly peppery taste and small leaves that can easily be incorporated into salads or used as a garnish. It can also be used cosmetically and medicinally.  Like other leafy greens, it’s packed with nutrients such as pro-vitamin A carotenoids and vitamins B9 and K.  It’s also one of the best sources of dietary nitrates, a compound that turns into Nitric Oxide in your body.  Though the benefits of nitrates are debated, some studies have found that they may help increase blood flow and reduce blood pressure by widening your blood vessels.

ENDIVE  belongs to the Cichorium family. It’s less well known than other leafy greens, possibly because it’s difficult to grow.  It’s curly, crisp in texture and has a nutty and mildly bitter flavour. It can be eaten raw or cooked.  Just one-half cup (25 grams) of raw endive leaves packs 72% of the DV for vitamin K, 11% of the DV for vitamin A and 9% of the DV for folate.  It’s also a source of kaempferol, an antioxidant that has been shown to reduce inflammation and inhibit the growth of cancer cells in test-tube studies.

BOK CHOY  is a type of Chinese cabbage.  It has thick, dark-green leaves that make a great addition to soups and stir-fries.  Bok choy contains the mineral selenium, which plays an important role in cognitive function, immunity, and cancer prevention.  In addition, selenium is important for proper thyroid gland function. This gland is located in your neck and releases hormones that play a key role in metabolism.  An observational study associated low levels of selenium with thyroid conditions such as hypothyroidism, autoimmune thyroiditis and enlarged thyroid.

TURNIP GREENS  are the leaves of the turnip plant, which is a root vegetable similar to beetroot.  These greens pack more nutrients than the turnip itself, including calcium, manganese, folate and the vitamins A, C and K.  They have a strong and spicy flavour and are often enjoyed cooked rather than raw.  Turnip greens are considered a cruciferous vegetable, which have been shown to decrease your risk of health conditions, such as heart disease, cancer, and inflammation.  Turnip greens also contain several antioxidants including gluconasturtiin, glucotropaeolin, quercetin, myricetin and beta-carotene, which all play a role in reducing stress in your body. Turnip greens can be used as a replacement for kale or spinach in most recipes